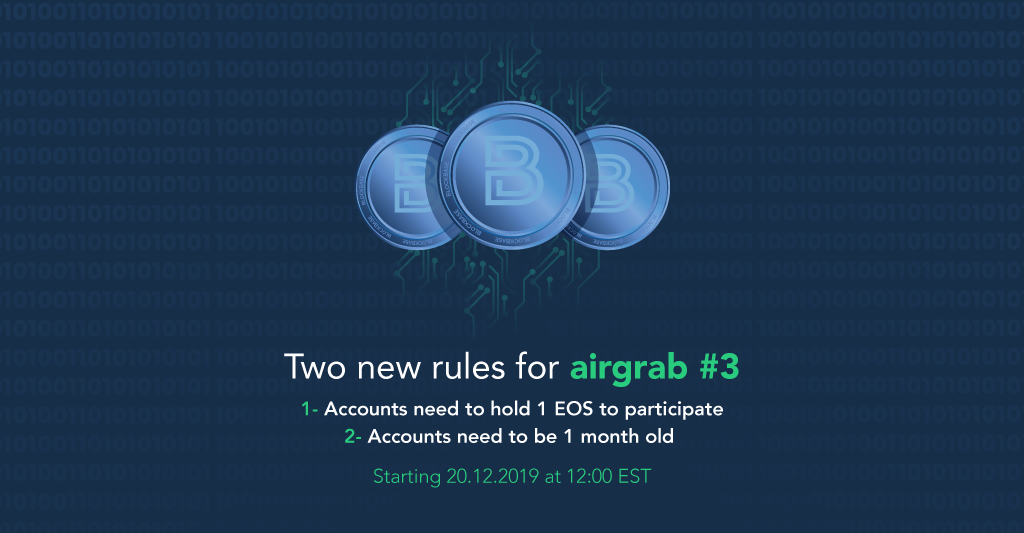 The goal of BlockBase’s airgrab is to have a broad and fair distribution of tokens. That’s why it was designed with a 24-month period, where any account can grab. Unfortunately, this model has suffered from abuse twice now, on airgrab #1 and on airgrab #2. Our analysis tools enabled us to detect thousands of accounts that belonged to the same entities, which were used to mass register. Those accounts were banned and didn’t receive any tokens. Nonetheless, we believe that these types of abusive registrations will continue. One thing we noticed, is that most of these abusive accounts didn’t hold any EOS at all. They were being controlled through delegation. Furthermore, some of them were very new, in fact some were created just to register on the airgrab.

For these reasons, we decided to introduce two new rules for airgrab #3, that will become effective after December 20, at 12:00 EST. All accounts that register for airgrab #3 prior to this date won't need to follow these rules.

Rule #1 – Each account needs to have at least 1 EOS unstaked or staked to CPU or NET at token distribution time. This means that at the end of airgrab #3, all accounts that registered after December 20 and don’t hold 1 EOS won’t receive any tokens.

The minimums applied to these rules could be subject to change in the future. To be on top of new developments follow us on our telegram and on our subreddit.